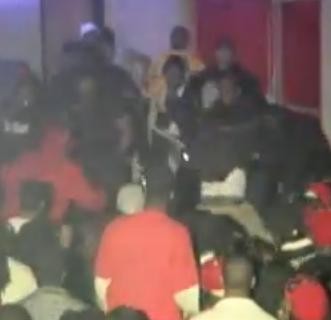 East St. Louis officials yesterday temporarily suspended the liquor license at nightclub Blackmon's Plaza following a wild fight early Saturday morning. During the fight, captured on video, club security can be seen body slamming and sucker-punching customers as chairs fly through the air during a melee that led to 40 officers from multiple jurisdictions arriving on the scene to quell the violence. The fight followed a concert at the club by rapper Webbie.

As the Belleville News-Democrat reports today, Mayor Alvin Parks and the the city's liquor commissioners also fined the club's owner, Johnny Blackmon, $1,000. That's the largest fine the city can issue for a first offense in the calendar year. The club will also lose its liquor license until April 20.

"East St. Louis is a great entertainment spot, but we will not tolerate hooliganism and thuggery," said Parks in noting that another city venue, Club Posh, is scheduled to play host to nationally known hip-hop star Lil' Wayne on Sunday.

Here's an additional video the fight. Action starts at about the 1:20 mark.