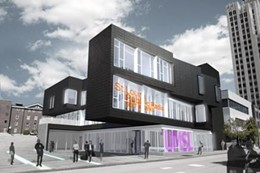 The station has been operating out of a basement bunker on the campus of University of Missouri - St. Louis since its founding in 1972. Fundraising for the new building has been underway for at least seven years, and not all the money for the $10 million center is in the bank. Still, enough has been raised to get the project underway.

St. Louis Public Radio hopes to move into the building by spring of 2012. The three-story, 27,000-square-foot facility in Midtown St. Louis will include UMSL classroom space and meeting facilities for the public.