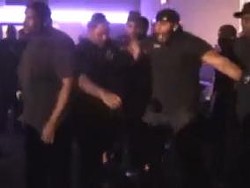 Yesterday we told you about a crazy night Friday (early Saturday morning, actually) in East St. Louis, in which police were called to stop fights at three separate nightclubs.

Now video has emerged of the most violent of those melees at Blackmon's Plaza. That's where a security guard was shot when violence erupted following a concert by rapper Webbie.

Website stlhiphop.com has the exclusive video in which you can see chairs flying through the air, security guards body-slamming and sucker-punching patrons and everyone getting the hell out of the building the moment a gun fires.