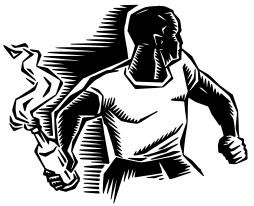 Here at Riverfront Times we've chronicled just how dangerous the "shake-and-bake" method of making meth can be, with junkies creating the highly flammable drug inside plastic bottles.

Now comes the first incident we know of in which a mobile meth lab has been used as a weapon.

The episode occurred last Friday, when a sheriff's deputy in southeast Missouri was called to investigate suspicious activity at a home in the small town of Harviell.

According to reports, the deputy arrived to witness 32-year-old Shawn Daggett holding a two-liter soda bottle like those often used to produce meth. Daggett then ran into a trailer behind the home. As the deputy attempted to enter the trailer, Daggett allegedly threw the bottle at the door, causing the trailer to burst into flames.

Daggett was charged with arson, assault on an officer and manufacturing a controlled substance. The officer apparently avoided injury.