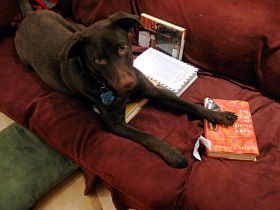 This week's list looks similar to last week's, except that Henrietta Lacks has definitely overtaken Sammy Hagar (is there some hidden meaning in there somewhere?). Coming in third is the surprise national bestseller Heaven is for Real, in which Nebraska pastor Todd Burpo (with the help of Sarah Palin's ghostwriter) tells the story of his son Colton's trip to heaven during emergency appendix surgery when the boy was four.

But look at this! Our hearts are also big enough to embrace Dan Savage's It Gets Better, a collection of stories to encourage gay teenagers. (Savage also read at Webster University.) And, on the children's/young adult side, The Very Hungry Caterpillar, Eric Carle's classic ode to gluttony which has somehow become co-opted by the people who want to fight childhood obesity, surged to the third spot, after the first two installments of Suzanne Collins's Hunger Games series. (St. Louis connection: Jennifer Lawrence, who played the lead in Winter's Bone, based on the novel by local author Daniel Woodrell, will play Collins's heroine Katniss Everdeen.)

Lists after the jump.

1. The Immortal Life of Henrietta Lacks by Rebecca Skloot 2. Red: My Uncensored Life in Rock by Sammy Hagar 3. Heaven is for Real by Todd Burpo 4. The Girl With The Dragon Tattoo by Stieg Larsson 5. The Imperfectionists by Tom Rachman 6. It Gets Better by Dan Savage 7. St. Charles Then and Now by Vicki Berger Erwin & Jessica Dreyer 8. Getting Things Done by David Allen 9. A Visit From the Good Squad by Jennifer Egan 10. The Girl Who Played With Fire by Stieg Larsson

1. Hunger Games by Suzanne Collins 2. Catching Fire by Suzanne Collins 3. The Very Hungry Caterpillar by Eric Carle 4. Nurse, Soldier, Spy: The Story of Sarah Edmonds, A Civil War Hero by Marissa Moss 5. Five Flavors of Dumb by Antony John 6. Of Thee I Sing: A Letter to My Daughters by Barack Obama 7. Impossible by Nancy Werlin 8. Lego Star Wars Visual Dictionary by Simon Beecroft and Jeremy Beckett 9. Linger by Maggie Stiefvater 10. The Battle of the Labyrinth by Rick Riordan