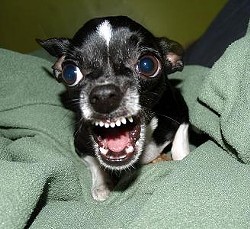 A sheriff's deputy in southeast Missouri resigned last week after killing a Chihuahua during a home search in Bollinger County.

For Deputy Kelly Barks, the dog's growl was apparently worse than its bite. Barks (yes, that really is her name) was reportedly responding to a domestic disturbance call in February when she encountered three growling dogs, including the Chihuahua. When the miniature pooch snapped at her leg, Barks shot the canine and exited the home.

Realizing that she hadn't actually been bitten, Barks re-entered the dwelling. She told her superiors that the Chihuahua continued to appear vicious, so she then reportedly shot the dog once more. The dog then retreated to its kennel, where Barks allegedly delivered a third -- and fatal -- gunshot.

Bollinger County Sheriff Leo McGrath told Cape Girardeau's KFVS last week that Barks had been a good employee; however, he was "just sick" about the killing of the Chihuahua.

"When I found out the dog that was shot was a Chihuahua, I really was upset," said McElrath.

Still, you have to wonder how skilled of a cop Barks really was. Three shots to put down a Chihuahua? I bet Barney Fife could've done it in a minimum of two.