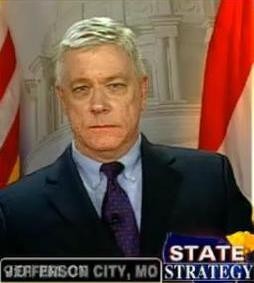 If you didn't see yesterday's article on Missouri Lieutenant Governor Peter Kinder, stop what your doing and give it a read. Post-Dispatch reporter Jake Wagman provides a text-book example on how to nail a double-talking politician to the wall.

Wagman's story reveals how Kinder, the state's top-elected Republican and a self-appointed Tea Party budget hawk, has spent tens tens of thousands of dollars in taxpayer money staying hundreds of nights at some of the most lavish hotels across the Missouri. Oftentimes, Kinder's expense reports provide absolutely no justification for why he stayed at St. Louis hotels such as the Chase Park Plaza, Ritz Carlton or Four Seasons attached to the Lumiere Casino, although his social calendar shows that he was in town those days for political purposes and not official state business. He refused to be interviewed for the story.

In a news release this morning the party is demanding that Kinder hand over all public documents relating to his hotel stays and reimburse the state for all travel costs related non-official business.

"Particularly at a time when families are saving money to make ends meet, it's unconscionable to think that Peter Kinder is asking Missouri taxpayers to pay for his odd and extravagant lifestyle," said Matt Teter, executive director of the Democratic party. "Peter Kinder can live the high-life in luxury hotels and casinos if he wants, but when he asks Missouri taxpayers to pick up the bill, it becomes an issue of very serious public concern."

Kinder, meanwhile, says he won't apologize for his hotel stays.