Is Arnold Home to the "Worst Hotel in the World"? 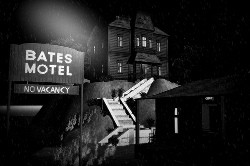 It may not be the Bates Motel, but there's still a macabre air to the Value Place Hotel, in Arnold.

The hotel, located on Arnold Commons Drive, near the intersection of Highway 141 and Interstate 55, has in the last two years been the source of 201 calls to the police; complaints have ranged from drug overdoses, prostitution, child pornography, assault, theft, drug manufacturing and sales, rape and burglary. The website hotelchatter.com says it might be the worst hotel in the world. We're still waiting to hear back from the manager for comment.

But, hey, at least it has high-speed Internet for just $10, as well as on-site laundry facilities!

Today the hotel chain's president is scheduled to sit down with City Manager Matt Unrein, to discuss a plan to curtail the illicit activity and keep the eerie inn in business. (In Arnold, city authorities have the right to revoke a business license if that business puts a resident's health, safety or welfare in jeopardy.)

According to KMOX, Unrein said he would listen to the hotel rep, but it will take a lot to persuade him that the hotel shouldn't be shut down.

Arnold Commons is "the crown jewel of the community," Unrein told KMOX. "It's home to Lowe's and Dierbergs and Texas Roadhouse and Chili's. And a number of other of great new businesses that have chosen to locate in Arnold, and this doggone hotel is right smack dab in the middle of them."

One of the hotel's mantras is "So clean you have to see it to believe it." Nix the "so clean" part, and we'd say that sounds about right.

If anyone has any tips on what goes down here, feel free to email us.