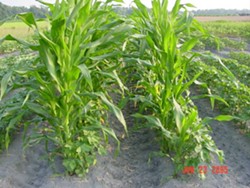 Earlier this week, more than 60 seed businesses and organic farmers banded together to file a federal lawsuit in New York against Monsanto (yes, again; see last week's suit in California over alfalfa).

The organic folks, organized partly by the Public Patent Foundation, hope to erect a sort of legal shield against the St. Louis-based agrochemical behemoth this time around.

If they succeed, Monsanto will not be able to sue them for patent infringement, should Monsanto-engineered crops sprout up unexpectedly in their organic fields.
Monsanto says they've pledged publicly not to do that, but Monsanto's critics don't trust it.
Organic Seed Growers et al v. Monsanto