Yes, yes, Riverfront Times recently ran a feature story excoriating Amazon for the toll it's taking on independent bookstores (at least the ones that specialize in new books), but now it turns out you have a reason to be grateful for the online behemoth, at least if you're a David Foster Wallace fan: Because of Amazon, you'll be able to buy your copy of Wallace's unfinished posthumous novel The Pale King at Subterranean Books on Friday night instead of two weeks from now.

The official publisher's release date for The Pale King is Friday, April 15, appropriately enough for a novel that concerns the IRS. There's a countdown widget on Little, Brown's website and everything. Accordingly, when Subterranean Books started planning its release party for The Pale King, it scheduled the festivities for the evening of April 14, with the books going on sale at midnight.

And then today, thanks to a call from a reporter from the New York Times, Subterranean's owner, Kelly von Plonski, discovered that Amazon was selling copies of The Pale King right now. Not taking pre-orders. Selling, and shipping. Theoretically, if they were willing to pay the expedited shipping fees, St. Louisans could have their copies of the book as soon as tomorrow.

"It turns out the book didn't have a one-day laydown date," von Plonski explains in a phone interview, sounding slightly harassed both by the Amazon sales and because her son Henry was howling in the background. "One-day laydown means you have to abide by a certain date, but with a regular release date, we can open our boxes and put the books out when they get here." 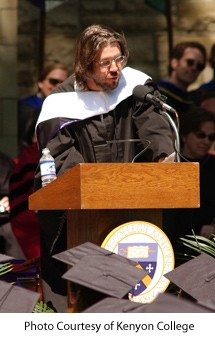 Subterranean's shipment is due this Friday, April 1, according to its publisher's rep, who von Plonski called as soon as she got off the phone with the Times. So von Plonski -- and Cameron Riesenberger and Robert Wallace, two customers who had been planning the midnight party -- decided to move the release celebration up two weeks, to Friday night from 8 to 10 p.m.

"It's still BYOB with David Foster Wallace readings," says von Plonski. "It's more of a celebration of him/chance to get your book, as opposed to a party with a buildup to a midnight release." (If you're a Wallace geek -- and you know who you are -- and would like to read one of your favorite passages, contact Reisenberger and Wallace at palekingparty@gmail.com to stake your claim.)

And so, St. Louis lovers of David Foster Wallace, you have Amazon to thank for your being able to get your copy of The Pale King early, in the company of like-minded readers and without having to pay for shipping.

As for von Plonski, "I've learned a lesson: If you're going to have a midnight release party, you should check the dates."