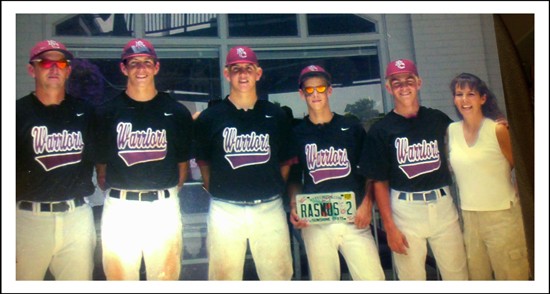 In this week's print edition, RFT freelancer Larry Borowsky notched an exclusive interview with Tony Rasmus -- the voluble father of Cards' phenom Colby Rasmus. Not surprisingly, Rasmus had more to say than we could fit within our print pages. We've got some of the best outtakes right here.


On his baseball program at Russell County (Alabama) High School:
If I had tryouts at my high school, I wouldn't have anybody come out. Everybody that plays for us transfers from a nearby school. We're pretty much geared toward trying to get you drafted, if that's what you want to do. Now, that don't mean just because you transfer, that you're gonna get drafted. But all our workouts and all the stuff that we do is geared toward pro ball. Everybody that comes to Russell County, they're probably pretty good baseball players to begin with, and their goal is to get drafted.

Now, the fallback plan is a college scholarship. I'm not sure I've had a senior in the last six or seven years that hasn't signed somewhere to play. Last year we had kids go to Auburn and Alabama. When Colby was going through the recruitment and all that stuff, one of the scouts asked me: "Does your son want to go to college to get a degree, or does he want to go there to play baseball? If it's to play baseball, then he ought to go pro and take his chances now." That was kind of the way we viewed it. And when they offer you upwards of $900,000, it's just about hard to turn that down.

On Colby's younger brother Cory, drafted in 2006 as a pitcher by the Braves in the first round (38th overall): I could stack all my kids together and me and my wife on top of them, and Cory would be smarter than all of us. He was the valedictorian.

Cory was the best hitter I ever had play for me, and I've had some pretty good players. He started for me as an eighth-grade kid and led my team in hitting. He broke his hamate bone two years in a row and it sapped all his power, so that's when he started working on his pitching. Cory was the kind of player Tony [La Russa] likes. He doesn't have to pull the ball. He'll drive that ball into the right-center field gap. If I'm comparing those two kids, Colby and Cory, Colby wasn't in the same class as Cory was as a hitter. Cory was a much better hitter. I've had scouts call me and say, "If the Braves cut him, we'll sign him tomorrow and put him behind the plate and let him hit."

On the differences between the Atlanta and St. Louis farm systems:
Cory can't squeak out a fart before the Braves tell him it's OK. I mean off-season program, Cory's got every day mapped out. They tell him what to do from the first off-season day all the way to the day before he reports. Cory's come under weight programs, workout routines, dietary things. Colby never had none of that. Not none of it. I don't know if one's right or one's wrong, but it appears there's not much of that going on with the Cardinals. I'm not sure they've ever told Colby anything. So you kind of get to a point where you don't want to leave him just hanging out there. You get kind of caught up in saying, "I don't want to butt into the Cardinals' business." But he's also my son, and if he feels like he don't have any guidance, you get caught saying, "Shit, I gotta try to step in and do something."

I'll tell you this, and this is just my opinion from a damn guy who coaches at a podunk high school in Alabama. But it's kind of hard for me to put young teenage kids away from home without any kind of guidance. You're setting yourself up for disaster, in my opinion. And it's why I think the Cardinals don't draft many kids. They go with college guys. College guys have already been through that learning curve of being away from home and figuring out how to do things on their own. A high school kid hasn't done that. And you see Garceau, you see Tyler Herron. Those kids are all pretty high picks, they're all gone by the wayside. [Both had serious drug problems and are out of baseball.] If there isn't some place to monitor and mentor those young kids, they're just gonna fall apart.

The best programs -- the Twins, for example. Man, they are regimented in everything they do with their young kids, from start to finish. So when they get into the big leagues, those Twins young guys are all technically sound, old-school baseball guys. You know, but they learn that every step along the way. The Cardinals organization -- I'm not sure they do that.

Are you that kind of coach with your own players? Do you impose a lot of control, and keep after them to make sure they're getting their grades?
We work out every morning at 5:30, before school. We work out after school. In the off-season. If I catch them out drinking, they're kicked off my team. If I hear they were drinking at a party, they're kicked off my team. And that seems extreme to some people around here, but the way I look at it, I drank all through high school because I could. Nobody ever told me I couldn't. Nobody ever punished me for doing it. And listen, Colby never spent the night out in high school. He always had a workout on Saturday morning, so he couldn't ever spend the night out on Friday. I think for some kids -- for Colby, as an example -- when he got with the Cardinals, he was so used to his day being mapped out, and now: Nothing. He had nothing to do. I felt like it wasn't productive.