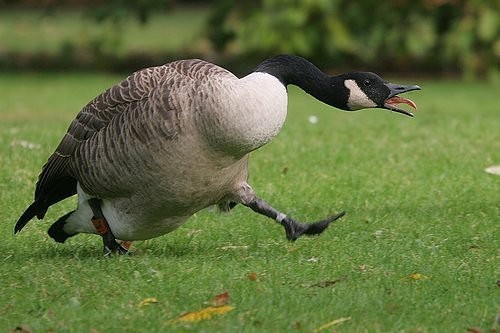 Worried about all those mountain lions being spotted in Missouri lately?

Forget about it! What you really need to worry about, apparently, are the Canadian geese.

KTVI (Fox-2) reports that a pair of geese went on a rampage at Shrewsbury's Kenrick Plaza yesterday, going after customers and even managing to knock down a police officer. The station reports that the pair were zealously protecting three eggs when they began "chasing and honking" at dialysis patients.

That's when the brave officer was called to the scene -- only to be attacked himself. (What, don't these waterfowl respect badges?)

Lt. Brian Catlett of the Shrewsbury Police Department tells Daily RFT that the officer suffered a "little scrape" on his elbow, and his coat was torn. Plus, Catlett admits, "he was taking a lot of harassment from his fellow officers at shift change yesterday."

But when it comes to the dialysis patients who use the plaza, the situation is a little more complicated. As it turns out, the Canada Goose is protected under the Federal Migratory Bird Act of 1918. That makes it a crime to harm or injure the birds -- even, apparently, if they're attacking a sworn officer of the law. Without special permission, it's also illegal to move their nests.

That said, in light of yesterday's attack, the state department of conservation gave the plaza owners permission to move the nest to a nearby lake, with hopes that the eggs' aggressive parents will follow. Catlett says the property owners are now taking the lead on the situation.

"We had to move on to other issues," he says. Either that, or the officers are just scared shitless.