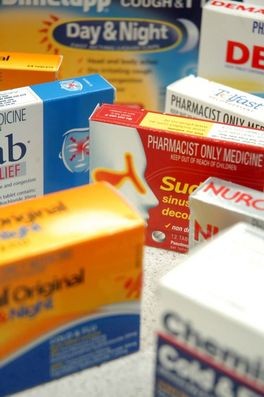 The drug -- found in such cold medicine as Sudafed and Claritin-D -- is a key component of methamphetamine. For the tenth year in a row, Missouri last year led the nation in the number of meth labs seized in the state.

At last night's city council meeting, Franklin County drug cop, Jason Grellner (featured prominently in this RFT feature story last spring) testified for the need for such bans, saying that inconveniencing "a few people who might have a stuffy nose" was well worth the cost of safeguarding the public from meth. Grellner told how just last week his department removed eleven kids from a meth lab.

The Asthma and Allergy Foundation of America was also on hand at last night's meeting to testify against the proposed bill. Despite those protests, the Wildwood council voted 14-1 in favor of the ban.

Council members say they hoped their ban would spur state lawmakers to pass a statewide law -- backed by Governor Jay Nixon and Attorney General Chris Koster -- that would require a prescription for pseudoephedrine. Following the passage of a similar law in Oregon, meth lab seizures in that state went from 400 annually to less than 20.

Still, the statewide ban faces stiff opposition. Recently, a trade group funded by the pharmaceutical industry called Consumer Healthcare Products Association has been spending thousands of dollars on radio ads urging Missourians to oppose the legislation. Meanwhile, as we reported this morning, state Senator Rob Schaaf says he'll filibuster to stop the bill. Schaaf, a medical doctor, believes the law will increase healthcare costs. He also notes that the state already has a system for tracking pseudoephedrine purchases.

My Daily RFT colleague, Sarah Fenske, agrees with Schaaf after spending an afternoon having to wait for her doctor to prescribe her meds to battle the flu. Moreover, she argues that decongestants without pseudoephedrine just don't work that well.

Frankly, I'll take officer Grellner's side on this one. The societal good of making pseudoephedrine (the key component of meth) available as a prescription-only drug outweigh the inconveniences to the general public. Further, have we become so over-medicated that we can't suffer through a couple days of the sniffles without running to the drug store for quick fix? What did people do for the millenia before the invention of the drug? Somehow they survived.

Lastly, the current system for tracking pseudoephedrine sales by having customers sign a log each time they buy the drug just doesn't work.

I have a family member who's a pharmacist for Walgreens, working stores all over the St. Louis region. In any one hour, he says he'll get at least four different customers purchasing pseudoephedrine who he suspects are smurfers -- people paid by meth makers to gather the raw ingredients for the drug. Why/how is that? Because there are more than enough meth addicts out there for the cooks to circumvent the per-person limits.