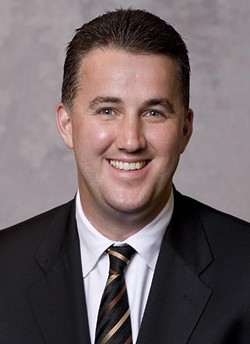 University of Missouri's athletic director Mike Alden hopes to land a replacement for the departed Mike Anderson today during a meeting in Florida with Purdue basketball coach Matt Painter.

Painter, the 40-year-old phenom who's taken the Boilermakers to six NCAA tourneys on the way to compiling a 155-66 record in seven years as a head coach, is said to be among the favorites to fill the vacancy at Mizzou.

But getting him to Columbia is far from a sure thing. The Post-Dispatch this morning paraphrased a source as saying that MU had a better than 50 percent chance of nabbing Painter. Now the Indianapolis Star reports that Purdue officials have met to offer him a more lucrative contract in the hopes of retaining Painter.

Painter, named the Big 10 Coach of the Year in three of the last four seasons, currently makes around $1.3 million. Prior to Anderson's hasty departure to Arkansas last week, Mizzou curators had agreed to pay the school's basketball coach a salary of around $2 million. Scuttlebutt is that Painter would receive that much to leave Purdue for Mizzou.