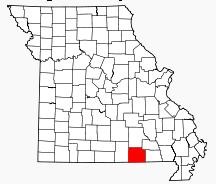 The Missouri Department of Conservation has confirmed the sixth sighting of a mountain lion in the state in the past five months.

The cougar was seen March 9 in Oregon County in south-central Missouri. A driver near the small town of Rover saw the animal cross the road and then struggle to hop over a fence. Testing from a cotton-ball-sized tuft of hair left on the fence has come back positive as belonging to a mountain lion.

MDC is now planning to ship a hair sample to a lab in Montana in hopes of determining the origins of the cat. The conservation department believes that the sixteen mountain lions sighted in Missouri since 1994 have migrated from western states such as Nebraska and South Dakota.