James Clark: "When a Young Brother Turns to Crime, It's an Indictment on Me" 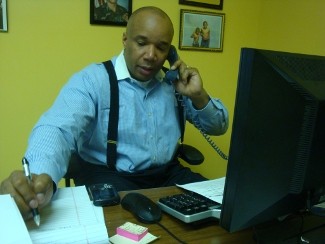 James Clark doesn't want more rallies. Or marches. Or slogans. In order to crack down on violence, he says, "We've got to take the conversation directly to the living rooms."

Such is the new, more direct strategy behind Better Family Life, a social-services organization dedicated to helping at-risk communities in St. Louis. Clark, the program's community relations chief, has made an effort to personally get to know the gang-bangers of St. Louis -- "the thundercats and young Turks," as he calls them -- by knocking on their doors himself, like a census worker, and introducing himself.

Two years ago, with the blessing of the police department, Clark began focusing on two neighborhoods -- Pemrose and Wells Goodfellow -- inviting drug dealers and ex-cons to weekly support group meetings on Saturday mornings at his office on Natural Bridge Road. Last year, violent crime in those neighborhoods dropped by 26 percent, compared to 16 percent in the rest of the city. Now, Clark and his colleagues are branching out, hosting community meetings in high-crime neighborhoods across north St. Louis.

The bi-weekly meeting series, called "End the Silence, Stop the Violence" will occur in six different neighborhoods. The first was held two days ago in Penrose; the next one will be held 6 p.m. April 6 at the Gamble Center, near Norman Seay Park. During the meetings, he'll invite kids to come to the Metropolitan Education and Training Center, where his organization offers the opportunity to develop skills in construction, welding, diesel technology and other trades.

The 44-year-old Clark, a former soldier who grew up in Jeff Vanderlou, walks around town with the feeling that everyone's pointing the finger at him. "When I hear that another young brother got caught for drugs, or murder, or any other crime, I view that as an indictment on us," he tells Daily RFT, pointing to his chest. "We've failed them."

Clark's not interested in blaming parents; he's all but given up on them. Struggling mothers and absent fathers are part of a lost generation, he says. Anti-violence efforts, he explains, must be directed toward teenagers and twentysomethings, while there's still time. (See a clip of one of Clark's campaigns in action, produced by the St. Louis American.)

But Clark isn't worried about the "America's most dangerous city" label that's dogged St. Louis. When crime finally starts to plummet, he says, "Everybody in the country -- from President Obama to the old guy with a beard drinking whiskey in Utah -- will want to know how we did it."