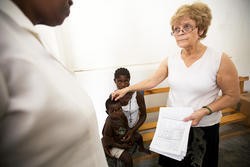 It's been a mystery to many how Dr. Patricia Wolff manages to balance running Meds & Food for Kids (MFK), an organization that produces and distributes nutrient-laden peanut butter to malnourished children in Haiti, with her own private pediatrics practice here in St. Louis. It must be said that Wolff herself is among the mystified, though she's been doing her balancing act since 2003, alternating three weeks in St. Louis with three weeks in Cap-Haïtien, Haiti. (For more about Wolff and MFK, see last summer's Riverfront Times feature, "Dr. Peanut".)

On June 30, though, Wolff's juggling exhibition will come to an end. Wolff will be folding up her practice at Forest Park Pediatrics and devoting herself to MFK full-time. The Haiti project is about to take what she calls "a huge technological leap forward" with a new factory that can produce ten times as much peanut butter, known as medika mamba.

Somebody needs to be at the factory in Cap-Haïtien to organize and supervise, and Wolff decided it may as well be her, though she admits she prefers practicing medicine to being an administrator.

"I was always doing both things and neither optimally," she tells Daily RFT. "It will require many, many more hours to launch the Haiti project, and there aren't enough hours to do that and keep my practice. I can be replaced more easily in St. Louis than in Haiti."

Wolff plans to maintain her three weeks here/three week there schedule, but instead of seeing patients, she'll be devoting her St. Louis time to MFK work: telephoning, fund-raising, grant-writing and meeting with aid organizations. At the moment, MFK's factory fund contains $1.835 million. The ultimate goal is $3 million, but Wolff says they need $2 million to "put the shovel in the ground." If all goes according to plan, the new factory should be operating by January, 2012.

Dr. Dana Ankney will be taking Wolff's place at Forest Park Pediatrics, but since Wolff announced her departure, she's been busier than ever.

"It's been crazy," she says. "Everyone wants to come in and have their blessing. Will I be pretty, will I be rich, will I be healthy forever?"