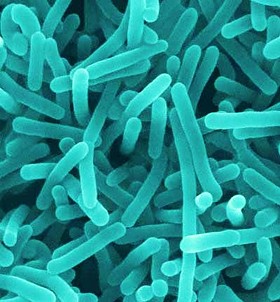 We all have a vast collection of bacteria in our intestines, a library, if you will. Most of these bacteria are friendly and helpful, allowing us to digest foods we wouldn't ordinarily be able to process. But when the balance of microbes is off-kilter, it can lead to problems like Crohn's disease, malnutrition and its opposite number, obesity.

Now a group of scientists at Washington University has figured out a way to reproduce a person's individual library of microbes in a petri dish and check out a few here and there and figure out how they work.

"This research helps set up a discovery pipeline in which we can deliberately manipulate collections of human intestinal microbes from people of different ages and cultures who are either healthy or sick," said Dr. Jeffrey I. Gordon, the director of the Center for Genome Sciences & Systems Biology and the leader of the intestinal microbe project. "This gives us the opportunity to identify new groups of microbes that may be extremely beneficial in various therapeutic settings."

That is to say, it's not possible yet to check out the exact strain of bacteria that will cure your obesity or get you to overcome malnutrition of Crohn's disease, but maybe someday. We can dream...

Gordon and his team's research was undoubtedly a smelly affair. They started with stool samples. That's how scientists and doctors refer to shit. It probably makes them feel better.

Anyway. The scientists took the stool samples from two unrelated people and grew bacteria in the lab in oxygen-free conditions that simulated the inside of human intestines. Then they sequenced the DNA on the gene 16S rDNA, that appears, with variations, in all bacteria. After tracking the variations, they realized that every microbe in the human intestines could also be found in the petri dish.

"We were able to capture a remarkable proportion of the diversity of each person's intestinal bacteria in the samples we grew in the laboratory," explained Andrew Goodman, a former postdoc who worked on the study.

In another experiment, the scientists split off certain bacteria from the community

The next step is to try these designer bacteria collections out in mice to see how they behave. And then -- maybe humans.