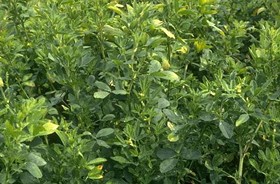 Environmental groups and organic farmers alike have slapped the USDA with a lawsuit for its greenlighting of Monsanto's Roundup-Ready alfalfa grass earlier this year.

The plaintiffs -- which include the Center for Food Safety and the Sierra Club, along with various alliances of organic farmers -- seem to be operating on the following syllogism:


Read the full lawsuit below. And, for those seeking more background, back in February, HuffPo did a good job explaining the viewpoints of the pro-organic folks and the farmers who want to make some $$$).
Center for Food Safety et al v. Vilsack et al

Bidness Food See You in Court!