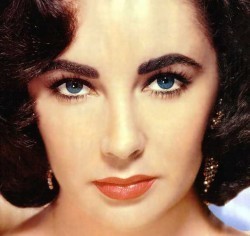 Certainly by now you've heard that violet-eyed multi-marriage movie queen Elizabeth Taylor has died at 79 from congestive heart failure. It's a loss for movie fans, tabloid readers and the beneficiaries of her multiple philanthropic causes.

And while we love to localize an international story as much as the next guy, it looks to us like perhaps the Post-Dispatch has taken some liberties with the map in their column wishing the iconic beauty off to the Great Sound Stage in the Sky.

Joe Williams, in his otherwise lovely and touching paean to the star, describes her parents as "art dealers from St. Louis."

Not so fast, Joe.

Her father, Francis Lenn Taylor, was born in Springfield, Illinois, about two hours' drive from the Lou. Taylor and his wife, Sara Sothern, later moved to her hometown of Arkansas City, Kansas -- about eight hours' haul from here.

It wasn't until they moved to London that Liz was born.

It's pretty safe to claim her parents as Midwesterners, and for that we can all take a bit of regional pride. But claiming them as St. Louisans seems a bit of a stretch.

For the record, we also find it somewhat hilarious that the writer of Taylor's obituary in the New York Times, Mel Gussow, died six years ago. It's pretty common for newspapers to have obituaries for big stars written well ahead of time -- remember when news of an already-written obit for then-26-year-old Britney Spears was leaked a few years back?

Apropos of Nothing Media Post-Dispatches