St. Louis Landmarks To Be Illuminated in Blue Next Month 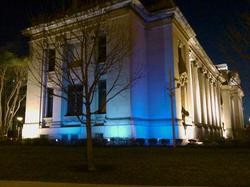 They are but a few of the St. Louis landmarks that will light up in blue next month in recognition of World Autism Awareness Day April 2.

Other St. Louis structures slated to bask in a blue glow April 1 and 2 include the Civil Courts Building, the Corner Building (Skinker and Delmar), Big Brothers Big Sisters at Grand and Olive, the Lumen Event Space on Locust and Lambert St. Louis International Airport.

HOK Lighting Group is donating its services for the effort, and organizers encourage local residents to light up their homes as well. Blue light bulbs available at Home Depot with proceeds of the sales going to Autism Speaks.

One in every 110 children in the United States is now diagnosed with some kind of autism spectrum disorder, and the figure is much higher for boys -- 1 in every 70.