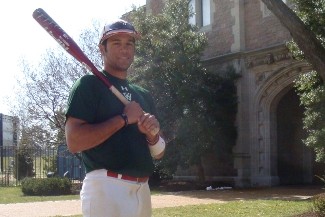 It's often said that the most difficult thing to do in all of sports is hit a round ball with a round bat. Think about it: Even if you fail seven out of ten times, you've still got a batting average high enough to land you in Cooperstown.

So it goes without saying, strikeouts are as much a part of baseball as peanuts and Crackerjack. Philadelphia Phillies MVP first-baseman (and St. Louisan) Ryan Howard struck out 157 times last year and still gets paid more than almost anyone in the league. At the NCAA level, only six players over the last twenty years have gone a season without fanning.

So last year, when Washington University junior third-baseman Miguel Davis finished the season as the only college player with just one strikeout, he seemed to have slayed a few baseball gods. This year, Davis returns to Wash U's lineup as a senior, with a new head coach, Steve Duncan, who comes from legacy stock. Together they hope to lead the team into a new, more serious era.

To spare you the suspense: A quarter into the season, Davis has struck out twice, knocking him out of the record books, at least for that category. But he doesn't seem to mind. At Duncan's advice, in fact, he's made an effort to take more pitches and work deeper into the count; that approach can tire out an opposing pitcher, generate more walks -- and, yes, increase the chance of striking out.

It's just one example of how the 30-year-old Duncan, who comes from D-III baseball powerhouse Johns Hopkins University, is trying to shake things up. The team's record right now is 7-9 -- partially attributable to Duncan's effort to beef up the schedule with tougher opponents. The Bears opened the season against Division-I (and defending Atlantic 10 champ) St. Louis University. (Wash. U. is D-III.) Then they faced off against three opponents ranked in the top 15, including last year's national champ, Illinois Wesleyan.

"Coach Duncan is a change we've been waiting for, because he comes from a successful background," Davis, a 21-year-old marketing/Spanish major from Cleveland and two-year team captain, tells Daily RFT. "Plus he's younger, so he can relate to us." (Duncan's predecessor, Ric Lessman, retired last year at the age of 72.)

Duncan also carries a baseball legacy. His grandfather, Larry MacPhail, and uncle, Lee MacPhail, are the only father-son combo in the Hall of Fame. (Granted, both entered the Hall as executives -- Larry as a Yankees owner; Lee as the president of the American League -- but it still makes for good trivia.) Duncan's cousin, Andy MacPhail, is currently the president of the Baltimore Orioles.

Wash. U. is part of the University Athletic Association, a non-traditional conference made up of teams from academically stalwart schools that don't belong to the same region. (Each year during spring break UAA teams play a weeklong tournament in Florida; this year the Bears finished the tourney 3-3).

In order to get into the playoffs this year, the Bears will need to earn one of two bids given to independent clubs or gain an at-large bid, which is difficult without winning 25 games. Duncan says this goal is still obtainable, adding that he expects the team to be ranked the Top 25 by the end of the year.

As for Davis? "I did the whole toughest-to-strikeout thing last year," he says with a shrug. "This year, it's all about making the tournament."