March 18, 2011 at 12:27 PM
comment
A woman driving westbound on Page Avenue in St. Louis last night is dead after being struck in the head by a stray bullet. 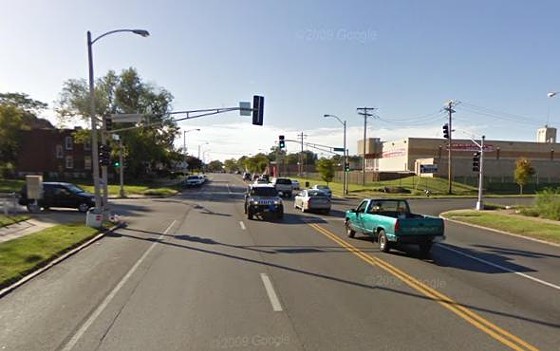 The St. Louis Metropolitan Police Department reports that two groups of suspects were exchanging gunfire at the intersection of Page and Euclid (above) when 39-year-old Patrice Thimes unwittingly drove her Lexus SUV through the firing zone around 9:55 p.m.

Thimes' vehicle came to a stop after careening into two vehicles at the intersection of Page and Aubert. She was reported dead at the scene.

Police say they're investigating leads into the two groups of gunmen, one of which was apparently standing in the 1200 block of N. Euclid and the other inside a dark black vehicle traveling north on Euclid.

KSDK reports that Thimes was the sister of accomplished jazz singer Denise Thimes.