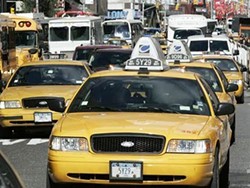 Last week, we told you about the lawsuit filed by a pair of taxi drivers, alleging that the $1 fee assessed on cabs leaving Lambert-St. Louis International Airport is an illegal tax.

But within days of the class action suit being filed, things are already changing at Lambert: Cab drivers coming from outside St. Louis County and St. Louis City say they've been told that they'll no longer be charged the extra $1 fee.

The cabbies see that as a sign that their lawsuit has gotten the attention of the taxicab commission. "They're trying to back off because of the suit," cab driver Charles Cole tells Daily RFT.


The taxicab commission disputes that claim.

The $1 surcharge came about in 2005. The airport had long charged cabbies $2 per trip, but then, in 2005, the Metropolitan Taxicab Commission added an additional $1 charge on every cab leaving the airport. The money went to fund the commission, which regulates taxis in St. Louis city and county.

Attorney Jennifer Fisher, who represents the cabbies, says that federal regulations require that any fees collected by airports go toward airport operations. That's true of the $2 fee, she says, but not the additional $1 that cabbies have been paying. That makes it illegal.

But Tom McCarthy, the attorney for the taxicab commission, insists to Daily RFT that the extra surcharge is OK. It was vetted by lawyers familiar with FAA regulations, he says. And since the parking garage collects the money and remits it directly to the taxicab commission, the money doesn't fall under airport regulations. "We have the statutory authority to do this," he says. "It's clear as a bell."

So why the change in how taxi drivers from outside the county are being treated? Well, for one thing, the taxicab commission only has limited jurisdiction over taxis that operate outside St. Louis County, as McCarthy acknowledges. He tells Daily RFT that the commission never meant to charge them the surcharge.

That has nothing to do with the taxicab commission, McCarthy says. He says that only the "proximity card" fees are remitted to the commission -- so the rest must go the airport. "The cab commission has never charged vehicles from outside St. Louis County," he insists. "We don't know who was charging them that fee -- although I doubt it was in anything other than the mistaken belief that it was correct."

Whether the timing is coincidence or not, it appears that out-of-county taxis are in for a break. As for the others -- the much larger group of cabbies under the control of taxicab commission -- Fisher vows to press the suit on their behalf, as well as on behalf of all the fees paid by out-of-county cabs in the last six years.

"They willfully and intentionally broke the law," she says of the taxicab commission. "They knew this was in violation of policy. We want to make sure that not only do we collect money on behalf of people who've been penalized for [the commission's] wrongful conduct -- but to help punish people who commit these types of actions."

McCarthy says the taxicab commission hasn't been officially served with the suit yet, but intends to defend the fee vigorously.