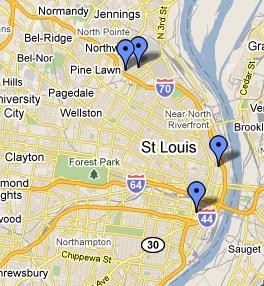 It was a busy night Wednesday for St. Louis' criminal element as at least six people -- most of them juveniles -- were shot in four separate incidents. Luckily, none of the victims sustained life-threatening injuries.

The gunfire began around 6:30 p.m. near Calvary Cemetery in north St. Louis that's where occupants inside a blue four-door vehicle shot a 22-year-old man as he stood in the 5300 block of Harney. The vehicle then rounded the corner to the 5300 block of Arlington and fired shots at a man who was able to dodge the bullets -- literally. Police have arrested one suspect in those shootings.

Around 9:15 p.m. three more people were shot near Lafayette Square in the 1400 block of Rutger. The victims -- all males ranging in age from 18 to 21 and all shot in the leg -- say that occupants inside an SUV opened fire on them.

Finally, a 16-year-old boy was shot in the toe around 11 p.m. at the intersection of Cass and 10th. The victim said he was confronted by four black males who fired upon him and a friend and drove off in a vehicle with tented windows.

It's worth pointing out, perhaps, that St. Louis public school are on spring break this week.