Death of a Bookstore: Piece of Mind Books 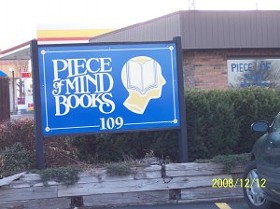 When you report a feature story, you don't always have the space to put in all the smaller stories you found, no matter how much you'd like to. Here's one of those that didn't make it into this week's feature, "Band of Bookstores."

When Andi Allen opened up Piece of Mind Books in Edwardsville, Illinois, nineteen years ago, it was the only bookstore within a 30-minute drive. The book business was very different then.

It wasn't Amazon that killed off Piece of Mind, though. Three years ago, the store suffered two devastating blows almost simultaneously. First, the recession hit. Then Borders announced it was opening up a new superstore a quarter-mile from Allen's store.

"That's their business model," Left Banks Books co-owner Kris Kleindienst says of Borders and Barnes & Noble. "They wait for you to make the market, and then they take it away."

Allen tried to fight the Borders menace by moving from her old spot in a strip mall to a new location in downtown Edwardsville, an area that supported more local businesses. The customers didn't follow. It wasn't lack of loyalty, they claimed, it was just that they didn't know where the new store was.

"We all have a set of blinders," Allen says, trying to be philosophical. "We see what we see at the time. At my first location, a person told me I needed a bigger sign. I said, 'That one is only ten feet tall.' Before we moved, we had a sign in the window for three months saying we were moving. It was six feet tall. After the move, for eight or nine months, we left a flier at the old store with a map. And still we had people saying, 'We didn't know you moved!' 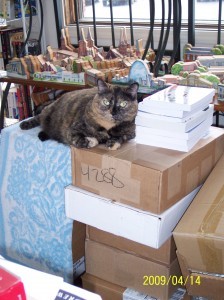 "When word got out that we were in trouble," she continues, "people who hadn't been in since we moved two years before came in and told me we were their favorite bookstore. It got frustrating. You can say you're sorry, but don't give me that other stuff, because it's not true."

Allen started stocking used books to distinguish Piece of Mind from Borders. She had a large greeting card section. But the tipping point was Amazon: She knew she could never match the online retailer's discounts.

Last summer, she decided to close up shop for good. Despite all their lip service about the importance of supporting local businesses, she felt that the community's actions spoke louder: They would rather get their books from a superstore or online.

"At that point," she says, "I was doing well enough. I paid my own bills. I had no debt. But it wasn't enough to live on, and I hadn't taken a salary in two years. As much as I loved what I was doing, it was working hard for nothing. To continue, to take on debt... It was time to cash out while I could do it on my own terms instead of letting debt drag me under. I wanted to quit while it was still fun, before I got bitter and started to hate it."

Since Allen owns the store's building, she didn't have to vacate right away. Over a period of six months, she had a series of going-out-of-business sales to clear out the stock. They were successful: At the last one, the cash register rang all day long. As soon as the store is empty, she plans to sell the building and then move to Ohio to be near her family. Then she'll look for another job.

Allen says she's at peace with her decision to close Piece of Mind. She got out before Borders' financial collapse wreaked financial devastation across the book business. This past Christmas, she got to take her first vacation in nearly twenty years. And right now, she's at Cardinals spring training in Florida, something she never would have been able to do when she had a store to run. "I have a life beyond the bookstore."

She's trying to be charitable to her former customers. "I used to think [shopping at Borders and Amazon] was hurtful," she says. "But people don't think it through. If they buy on Amazon, they can't expect to have a local business to support. There comes a point when the community isn't supporting you at a level that allows you to survive."