March 17, 2011 at 10:00 AM
comment
The following surveillance tape, showing the lobby and parking lot of the City Nights nightclub, was obtained from a family member of Anthony Rice. Rice was fatally mowed down by a pickup truck outside the east-side club in October 2009. The club has since burned to the ground; to date, no one has been charged in Rice's death. (See our feature, "Left For Dead," for the full story. Commentary after the jump.)

1:48 -- In this footage, a customer is telling Rice's friend, Andrew Neal, that the club is closing. At the same second, you can see Reggie Allen's hand gesturing to Neal, asking to see his ID. Allen is the son of City Nights' owners.

This bit of footage explains the confusion about whether the club was open or closed. Contrary to what some have suggested, race doesn't seem to anything to do with this.

Anthony Rice, in the striped polo, has already given up and is headed out the door.

1:51 -- Many readers have asked RFT: When they left the club, did Rice and his friends start mouthing off? In this frame, you can see Neal say something to Allen. It's unclear what, because there's no audio.

2:28 -- Reggie Allen and other staff members have emerged outside the club, and Anthony Rice seems to be laughing about something. At this point, both camps are probably jeering at each other -- but there are no signs of violence. Yet.

3:14 -- The violence begins when Reggie Allen throws a brick through Andrew Neal's driver side window. (You can see him hurl the brick, though the car is just off-screen). Anthony Rice immediately -- and angrily -- walks over to confront him, but Allen scurries back into the club.

3:51 -- Brandishing a Taser, City Nights bouncer Charlie Hurd is trying to bust out of the front door, but Anthony Rice bars the door, gesturing to his brother Aubrey to run. Meanwhile, Reggie Allen has gone out the back door and is getting into his white pickup.

4:40 -- The way Allen is swerving his white pickup truck around the lot, it appears he's chasing somebody on foot, though it's impossible to make out any figure. Friends of Allen told RFT in earlier interviews that the reason he'd come around front in the first place was to ensure the safety of his customer. But the customer is long gone. What is he doing?

5:42 -- WATCH CLOSELY HERE. Although this is some of the hardest footage to make out, it appears to be the crux of the entire incident. It looks like a figure is running away from the oncoming headlights of Reggie Allen's pickup truck. The figure then disappears. Based on what we know thanks to police reports and witness interviews, we can assume the figure was Anthony Rice -- and it disappears because it's been run down by Allen's truck. 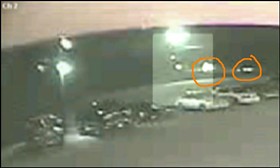 
If this video indeed shows Anthony Rice getting run over, it would be consistent with where the body was found -- not terribly far from the final collision of the two vehicles.

It would be inconsistent, however, with Aubrey Rice's statement that he saw his brother get hit, had time to run over to his side and see him struggling to breathe, get back in his car, and pursue Allen. The action transpires too quickly for that to have occurred.

Notably absent in this video is one crucial element: the gunshots. Neal says he fired two shots into the air to scatter everybody. According to the Allen camp, Reggie believed he was being fired at. (That doesn't necessarily explain why he was burning around the parking lot -- wouldn't his impulse after being fired on be to drive away and call police?)

The gunshots, RFT suspects, will be important in this case. Originally, Andrew Neal  fibbed to police that he hadn't even brought a gun to the scene.

Of course, originally, the City Nights staff reported this crime as a carjacking. And, as this video makes clear, it wasn't anything of the sort.

Note: This video was not edited in any way by Daily RFT.