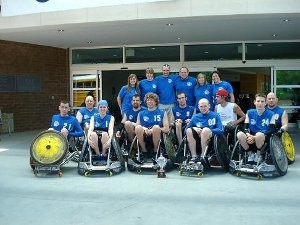 Fresh off their first run in the national tournament last year, the St. Louis Rugby Rams -- the toughest quadriplegic men and women in the city -- will open the 2011 sectional tourney this Friday to see if they can make it back-to-back appearances. The Rams, who participate in the St. Louis Wheelchair Athletic Association, won a bid with the U.S. Quad Rugby Association to host the Heartland Tournament after last year's successful run.

The matches will be held at Southern Illinois University -- Carbondale, and this time around, the Rams are the team to beat; they enter the tournament as the No. 1-ranked squad in the Midwestern region. If they finish the weekend in either first or second place, they'll move on to the Division One National Championship, held April 15 to17 in Birmingham, Alabama.

The team is anchored by Paralympians Kerri Morgan and Clayton Braun. Don't let them mow you down.