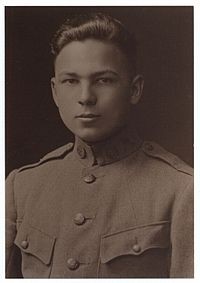 A man born in 1901 in the small northwestern Missouri town of Bethany was laid to rest yesterday in Arlington Cemetery with full military honors. President Barack Obama and Vice President Joe Biden attended the services.

Frank Buckles was widely considered the last living American veteran of World War I. He died February 27 at the age of 110.

Buckles was sixteen years old in 1917 when he managed to enlist in the Army after being rejected for service by the Marine Corps and the Navy. He spent the war in England and France driving motorcycles and ambulances for the Army's medical unit.

Although born in Missouri, Buckles family moved to Oklahoma when he was five years old. Later in life Buckles settled on a farm in Virginia where he drove a tractor until the age of 103. Although not in military service during World War II, he spent much of that war as a prisoner of the Japanese when he was captured while on business in the Philippines.