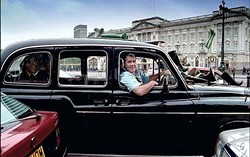 Here's the predictable (and pathetic) follow-up to an issue we wrote about last month.

By a vote of 102 to 56, the Missouri House yesterday passed a bill requiring that state driver license exams only be administered in English. Currently, Missouri allows the test to be taken in eleven different languages.

Although Daily RFT tends to disagree with state representative Mike Talboy when it comes to his effort to do away with midwifery in Missouri, the Democrat from Kansas City nailed it on the head yesterday when he said of the driver-license proposal:


This bill is xenophobic...This is about people who are here legally. And, we're going to go after them now, because quite frankly we're running out of groups to pick on now.

The bill now heads to the Senate, where one expects that the right-wingers there will attempt to make the bill even more English by requiring Missourians to drive on the left side of the road.