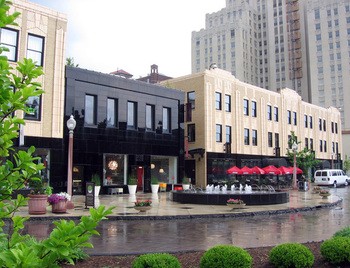 The Erker family has sold eyewear in St. Louis for 131 years -- and if you're the kind of person who doesn't mind dropping $1,000 for a pair of glasses, you've probably visited either their shop downtown or the one in Ladue.

But now, the family patriarch, Jack Erker, says that the clan is branching out into glasses that are a bit more affordable. Eye Roc Eyewear, which is scheduled to open in the Central West End's Maryland Plaza on April 1, is an entirely new concept, the family's first in its thirteen decades in the eye business.

If Erker's is the wealthy grandpa, Eye Roc intends to position itself as the hipster grandson -- no trust fund required.

The genesis for the new store was a conversation Erker had with one of his sons, who mentioned that, if he didn't work at the company, he probably couldn't afford the eyewear it sells.

"I don't know if he was hitting me up for a raise, or what," Erker jokes. "But we realized that a lot of people are not in a position where they can afford to pay $1,000 for a pair of glasses. We want to go after the college students, the young professionals -- people who want the quality but can't afford the prices."

To that end, the company is designing its own frames, as well as traveling the world picking up the work of talented unknowns, Erker says. The price point will be around $300, and for that, you're not going to get a name-brand designer ("Dolce & Gabbana, Gucci, all that stuff is made in China -- it's of poor quality," Erker says). But you may get a fabulous pair of glasses.

"Typically the frames [in that price point] are mainstream and boring," he says. "We're trying to offer the looks people want at a price they can afford. These are going to be things they've never seen, things you can't find on the Internet."

The shop is moving into the space vacated by McGinty Jewelers just after Christmas, a small storefront next to Bissinger's, just east of the Maryland Plaza fountain.

Incidentally, Eye Roc will be the second eyeglass shop in the Central West End. Eye Bar, at the corner of McPherson and Euclid, opened in 2009.