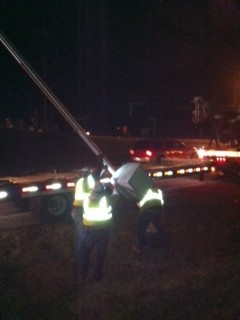 Updated with response from ATS

Rhodes was driving through his Franklin County town around 10 p.m. last night when he saw the damnedest site: a group of electricians taking down Washington's red-light cameras.

A city councilman for thirteen years, Rhodes led the charge in January to sever Washington's contract with red-light camera operator American Traffic Solution (ATS). Rhodes tells Daily RFT today that his research showed that the cameras -- in place for three years -- did little to diminish accidents.

"It was no improvement whatsoever," says Rhodes. "But they (ATS) justified the cameras by saying that 80 percent of violators weren't from Washington. To me that doesn't matter. We want people to visit our community. All they're doing is fleecing drivers of $500,000 in three years' time."

At a council meeting earlier this year, Rhodes helped convince five colleagues not to renew the contract with ATS. The measure passed 6 to 2, and the ticket program officially ended March 7. At the council meeting that night, Rhodes suggested that the city place burlap bags over the cameras to make sure they couldn't take photos.

He says that he also called ATS this week to ask when they planned to remove the devices from their two intersections in Washington. Rhodes says he promised KMOV Channel 4 that he'd give them a call so they could get footage of the cameras coming down.

"I don't know if it was my burlap bag comment or they were worried about the TV cameras," says Rhodes. "Either way, I couldn't believe it when I was driving down the street last night and saw a crew removing the poles."

Rhodes grabbed his iPhone and snapped more than a dozen pictures. He says he asked the electricians -- subcontracted with Gerstner Electric -- why they were working such odd hours.

"The guy responded that it all paid the same," says Rhodes.

Charles Territo, a spokesman from ATS, says removing cameras at night is quite common and doesn't point to any conspiracy.

"As is often the case with road construction work, the cameras were removed at night in order to ensure the least possible disruption to the local traffic patterns," says Territo. He adds, "As you know, red light safety cameras have proven to be an effective tool for law enforcement to use to enhance public safety. While we're disappointed that Washington chose to end their successful program, demand for red light safety cameras across the country continues to grow. It won't be long before Washington's cameras have a new home and begin saving lives in a new community."

Tip of the hat to Matthew Hay and his website wrongonred.com for alerting Daily RFT to this tale.