Are the Rams Really Gunning for Plaxico Burress?

Okay, so before I really even get into this I have to admit the title is really kind of a stretch. See, I'm really writing about two troubled wide receivers the Rams might have some interest in, along with another guy who isn't really troubled, just inconsistent. But that's just a terrible title for an article.

So, now that that unpleasantness is behind us we can get down to business. We all know the Rams need some receiver help, and there are three names currently on the market who have either been linked to the Rams directly or make sense as guys they could have interest in. James Jones, recently of the Green Bay Packers, Mike Sims-Walker, recently of the Jacksonville Jaguars, and Plaxico Burress, recently of the Alcatraz Albatrosses are the players. Do any of them really make sense?
To start from the top, James Jones would be a boon to myself personally, as well as most other sportswriters in St. Louis, just because of the sheer number of Jim Jones jokes we could work into articles and headlines. (And if you happen to be one of those odd people who don't think mass suicide jokes are funny, then pray like hell he doesn't end up here, 'cause it's totally gonna happen.) Beyond that, though, Jones isn't exactly a world beater. He's struggled to this point in his career with inconsistent hands, in spite of the fact he's typically touted as a possession-type receiver.

Jones averaged 13.6 yards per catch last season, exactly in line with his career numbers. It was the most productive season of his career overall, as he ended up with 50 catches on the year for 679 yards. Not exactly elite numbers, but still pretty good. With the good comes the bad, though, and for Jones the bad is dropped passes. Lots and lots of dropped passes. In the Packers' playoff win over the Eagles Jones was a particularly egregious offender, dropping a sure touchdown pass in the first half. Luckily for Jones and the Packers the drop didn't end up costing them, but what would have been an easy 60+ yard catch and a TD instead turned into just another frustrating miss for a receiver whose career has seen too many already. You need look no further than the drops to see why Jones is just a good receiver instead of an elite one.

The question, of course, is whether Jones would make the Rams a better team or not. He's a very similar player to Brandon Gibson, the possession receiver who has struggled with dropped balls early in his career the Rams already have on the payroll. To Gibson's credit, I think his hands improved markedly as the season went on, and he ended the season with a 58% catch rate, which is actually quite good. Jones caught 57% of the balls thrown his way last season. Jones does have the advantage in terms of yards per catch, with Gibson averaging just under 12 YPC in 2011, but playing in one of the most prolific offenses in the NFL undoubtedly benefited Jones on the front. With reliable deep threats there's just more room on the field. 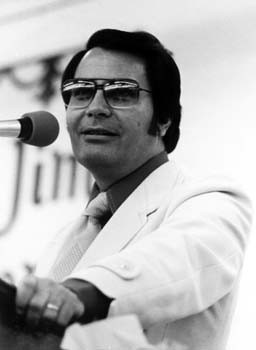 ​So would Jones, and whatever he would cost to bring in, really represent much of an upgrade over Brandon Gibson? To my eye, while it might be an incremental gain, I just don't see enough of an upside. Gibson will be entering his third year in the league in 2011, the season receivers (anecdotally, at least), tend to take a step forward. It will also be his second season playing with Sam Bradford and a Ram offense that will hopefully be improved. For my money, I wouldn't bet on Jones being any better than Gibson going forward.

Mike Sims-Walker is a little bit different animal. He's cut from much the same cloth as Gibson and Jones, in that he's a possession receiver with a strong frame and good body control, but he has something that neither of the other two can lay claim to: a dominant season.

There have been reports recently the Rams have already contacted Sims-Walker's agent, which is a little odd, considering he's still in limbo contractually, due to the current CBA issues. I doubt Jacksonville would want to pursue tampering charges, but it does put a line under the weirdness that currently is free agency in the NFL.

In the 2009 campaign, Sims-Walker caught 63 balls for 869 yards and 7 touchdowns. At the time he was viewed as one of the real rising stars in the league. Unfortunately for the Jaguars Sims-Walker was much less productive in 2010, catching 43 passes for 562. He did have another seven touchdown catches, proof he has the size and strength to be a weapon in the red zone, but he also disappeared for long stretches of time. He had two big games on the season which pulled his totals up considerably. He went off for 10 catches and 105 yards against the San Diego Chargers and their porous defense, and just blew up the Cowboys for 8 and 153. Dallas did have one of the worst secondaries in all of football, though. In those two games Sims-Walker had 18 catches and 258 yards. In the other 12 games he played he had 25 catches for 304 yards. That's not good by anyone's standards.

The biggest questions for Sims-Walker are all makeup-related. You hear the word lazy tossed around a lot with him, as well as whiner. There have also been concerns voiced regarding the health of his knees, but the character concerns are seemingly a much bigger issue. The Rams have been very careful about bringing in players with character issues under the Billy Devaney/Steve Spagnuolo regime, which I think has had a lot to do with the positive direction the team is headed in. To change that direction now for a player who, as with Jones, simply doesn't offer that much of an upgrade over your current possession receiver just doesn't make much sense to me.

Which brings us to the final member of our triumvirate, Plaxico Burress. You'll probably remember Burress is the former New York Giants wide receiver who shot himself in the leg with an illegal firearm and has served almost two years in prison as a result. At his best, Burress was a different sort of receiver from these other players, a true deep-ball threat who relied more on his leaping ability to high-point the ball rather than blazing speed.

The reason Burress might be associated with the Rams is Adam Schefter of ESPN, who described Spagnuolo as a, "Burress booster," and said St. Louis might be a potential landing spot for the receiver.

To be honest, I wouldn't have a huge problem with Burress coming here. He was a punk even before he shot himself, but that doesn't mean he couldn't have put some of his demons behind him. More to the point, if the Rams believe he's in shape enough to contribute, Plaxico could offer an honest upgrade to the receiving corps. Whether he does in fact have his legs under him to the point he could contribute after two full seasons away is anybody's guess, however.

Of course, Burress would represent the ultimate test of the Four Pillars philosophy. Never a high makeup guy to begin with and now coming off a prison sentence, Plaxico doesn't exactly scream character. Whether or not that's enough to keep the Rams from seeing him as a possible contributor is tougher to say. Spagnuolo is certainly familiar enough with Burress to have a pretty good idea what sort of player he would be getting

There you have it. Three players, all three with serious concerns about their games, two with serious concerns about their lives. Honestly, I don't see James Jones or Mike Sims-Walker as significant upgrades over what the Rams already have in Brandon Gibson. Plaxico Burress is the only one of the three I would be at all interested in seeing play in blue and gold, and I'm decidedly lukewarm on that prospect as well. At least Burress would offer a legitimate down the field threat.

It's tough upgrading a team.