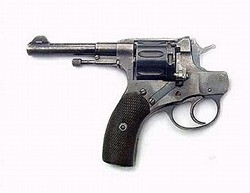 In what's becoming something of a disturbing trend in Missouri, a man in the southwestern part of the state accidentally shot and killed himself Saturday during a program on gun safety.

The incident occurred outside of the town of Vanzant, where 63-year-old Glenn Seymour was taking a class to receive a concealed carry permit. According to reports, the class was working on an exercise where they'd draw their gun with their non-dominant hand and shoot.

Seymour, who was more familiar with revolvers, was using a 9mm Browning semi automatic at the time and evidently aimed the weapon at his body while trying to remove the safety. That's when the gun went off, striking him in the chest.

And here we thought concealed carry was supposed to make guys like Seymour safer?

But, hey, at least Seymour didn't put the gun to his head and pull the trigger as a way to test the safety. That would be just Looney.