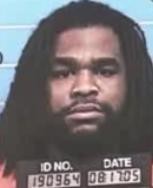 As you've likely heard by now, one of the U.S. marshals shot yesterday while trying to arrest a suspect yesterday in St. Louis on drug and assault charges is now dead.

John Perry, 48, succumbed to a bullet wound around 7 p.m. Tuesday at Saint Louis University Hospital. Another marshal also shot during the attempted arrest is recovering from a bullet wound to an ankle. Meanwhile, a St. Louis police officer who was shot by the suspect was treated and released after a bullet reportedly deflected off his bullet-proof vest and grazed his neck and face.

Suspect Carlos Boles was killed by return fire around 7 a.m. yesterday morning as he hid out in the second floor of an apartment on Osage Street in south St. Louis. But who is Boles -- and could such a tragedy have been avoided?

In October, police Tasered and arrested Boles for resisting arrest on suspicion of dealing narcotics. But Boles was allowed to leave police custody a few hours later, giving law enforcement time to test the residue inside a pill bottle that he allegedly discarded during the arrest. The test came back several weeks ago revealing traces of heroin and cocaine. Police were returning to Osage to re-arrest Boles on those drug charges when all hell broke loose yesterday.

Court records show that Boles 35, pleaded guilty to assault in 1993 while serving inside a juvenile detention center. Multiple charges and guilty pleas followed:

As Fox 2 reports, Boles could still have been locked up for the 2005 case in which he was arrested for possession and resisting arrest. Instead, the judge reduced his seven-year sentence to just a few months of shock treatment and three years of probation.

Boles' girlfriend said he survived being shot fourteen times as a teenager.