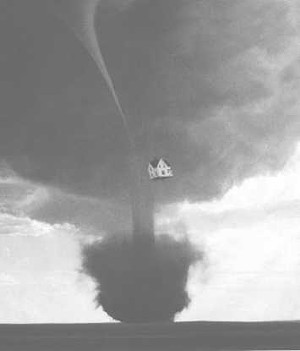 It's irony that only Alanis Morissette could love:

The state of Missouri had to cancel its annual Severe Weather Drill today because of -- yep -- severe weather. Apparently we won't just be practicing our response to crazy weather conditions today; we may actually be living it tonight. (The practice has been rescheduled for Thursday, presuming thunderstorms, tornadoes and the like don't destroy this state first!)

Suffice it to say, between this and the recent tornadoes hitting St. Louis, Daily RFT is now scared enough to pay attention to severe weather warnings.

We touched base recently with John Wagner, a member of the St. Louis Area Regional Response System (STARRS) Disaster Prepared Advisory Committee, to talk about Missouri's Severe Weather Awareness Week -- which just happens to be this week -- as well as how the heck to stay safe when the wind's a-blowing and the rain's a-pelting.
Wagner wanted to let readers know about the area's new website, www.allreadySTL.com, which has helpful tips for emergency preparedness. The main components? Make a plan. Prepare a kit. Be informed!

"The key is, you want to make sure you've actually given thought to what you would do in a particular emergency or disaster," he says. "The focus is on individuals preparing, not relying on first responders. Yes, they'll probably be there, but depending on the severity of the event, they may not be there for a few days. How are you going to survive on your own -- or with your neighbors?"

The site recommends that the kit in question have enough food, medication and water to last for three days -- along with, of course, a radio (to tune in for further information), and maybe even extra batteries for that radio. "Whatever you think you might need," Wagner says.

The biggest key for disaster preparedness folks is battling the perception that it can't happen here -- or it won't happen to me. "With radar as powerful as it is, they can call a warning if they detect a bit of a twist on the radar, and people become desensitized," Wagner says. "So they'll think, 'I went to the basement last week, and nothing happened.' At that point, they should go check out the TV stations and see exactly what's happening. If it really is coming your way, you need to stop what you're doing and seek safety."

And before that event comes, Wagner says, it's important to think through all the possibilities. He tells us about a conference he attended where a woman who'd wrote a book about the events of 9/11 shared the story of an executive in the World Trade Center who was a stickler for preparing his team for any disaster that could come their way. "Even if someone was just visiting, he'd show them where the stairs were in the event of an emergency," Wagner recalls. The staff, too, was well-drilled.

And so on 9/11, while thousands perished, this particular office was ready to go. "When things got tense, they got back to what they'd practiced," he says. Almost every single person in that company was spared as a result.

So. We doubt things are going to get that deadly tonight in St. Louis. But would it kill you to take a minute and make a plan -- and prepare your kit -- just in case?