Teenage Manager of TitleMax Indicted for Fraud; Will She Be Filleted? 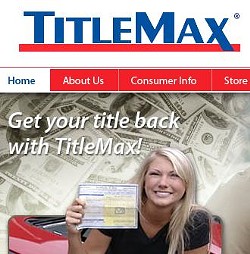 At the risk of hearing from a few corporate attorneys, I'm just going to put this out there: Based on its television commercials, TitleMax has always struck me as a somewhat questionable franchise.

You've seen the ads, right? Give TitleMax the title to your car, and they'll give you some quick cash. It's as simple as that. Of course, if you don't repay your loan, they get to keep your car. (Oddly, that's never mentioned in the commercials.)

But could it be that you don't even need a car title to get a loan from TitleMax? That's what the U.S. Attorney's office in St. Louis alleges in a criminal complaint filed yesterday against the former manager of a TitleMax in Moline Acres.

Mignon Norfolk-Jones is charged with fraud and creating phony loan applications for her boyfriend Devonte Cosby and others. Norfolk-Jones allegedly knew that her sweetheart and other friends did not have automobiles to post as security for the loans and that the loans would not be repaid. Yet, in five instances, she helped them get loans anyway.

According to the indictment, she would tell these accomplices to cash the loan checks and divide the proceeds with her.

And here's the real kicker to the story, in my humble opinion.

Norfolk-Jones, the esteemed manager of the Moline Acres TitleMax, is nineteen years old, according to prosecutors. Sorry, but outside of a few sno-cone stands, what legitimate business lets a nineteen-year-old serve as its manager? Especially when you're talking about a financial institution?

If convicted, the federal court could, umm, "fillet" Mignon with 100 years in prison (20 years per each count of wire fraud) and fine her up to $250,000. Her boyfriend could spend 20 years in the poky.

I wonder if her family will post bail with a loan from TitleMax? That would be the cherry atop this fruit cake.