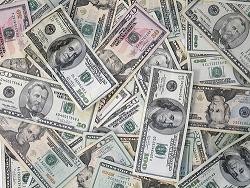 The official tally came out in court yesterday as the aptly named Ryechine Money, 32, pleaded guilty to being one of four armed robbers who took part in robbing ATM Solutions.

As the Post-Dispatch reports, about half the loot has been recovered.

Initial reports had the amount of money stolen pegged at nearly $11 million, but those estimates were later lowered. Money is the second person to plead guilty in the case. John Wesley Jones, who police arrested with a mound of cash in the trunk of his car and who later escaped from custody, pleaded guilty in January.