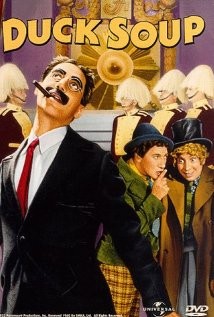 The Clayton lawyer had been hoping to get several Clayton residents to sue but, in the end, settled on just one. He is Arthur Gallagher, a 55-year-old retired vineyard owner from California, who says he enjoys smoking a cigar every day in Concordia Park across from Kaldi's coffee shop on DeMun.

As we previously reported, the suit claims that the Clayton law regarding outdoor smoking violates constitutional rights and infringes on ancient American traditions involving the pursuit of happiness, i.e. smoking peace pipes.

The lawsuit begins by quoting the following song from the Marx brothers' film Duck Soup, in which Groucho Marx plays a dictator bent on establishing laws denying personal freedoms in the mythical, and ironically named, country of Freedonia.

These are the laws of my administration:
No one's allowed to smoke
Or tell a dirty joke --
And whistling is forbidden...

If chewing gum is chewed,
The chewer is pursued
And in the hoosegow hidden...

If any form of pleasure is exhibited
Report to me and it will be prohibited.
I'll put my foot down;
So shall it be -
This is the land of the free.
.
An attorney for Clayton tells the Post-Dispatch that the Groucho Marx reference "is telling evidence of the merits of the case."

Schock, meanwhile, also argues in the suit that car exhaust from nearby roadways, general smog from manufacturing, and barbecue grills inside city parks pose as great or greater harm than cigar or cigarette smoking inside Clayton's public green ways.

The suit (viewable in its entirety below) asks the court to nullify Clayton's smoking ban inside public parks, which first went into effect January 1 of this year. It also asks for reasonable attorney fees and $100 in damages for Gallagher.