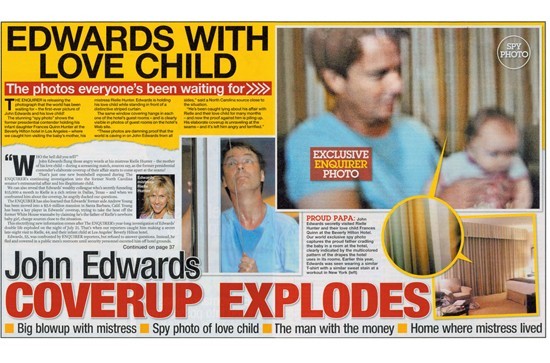 For all of you scandal-mongers who followed John Edwards' affair and complete-and-utter fall from grace with baited breath, boy, have we got a doozy for you.

It turns out the unnamed source close to Edwards' paramour Rielle Hunter who tipped off the National Enquirer -- thereby setting in motion a chain of events that would lead to Edwards downfall -- was Virginia "Pigeon" O'Brien, a former online community editor at the St. Louis Post-Dispatch.

As O'Brien writes in a fascinating essay about l'affair Edwards in yesterday's Huffington Post, she actually offered to put the adulterous pair up in her St. Louis apartment during one of Edwards' stops through town. (Naturally, this is before O'Brien realized that her old pal's married boyfriend "John" was actually John Edwards.)
O'Brien doesn't write about her work at the Post-Dispatch anywhere in the piece; she's described merely as a former magazine editor who lives in the Hill Country of Texas.

But it's particularly fascinating, in light of her work for the venerable daily, to hear her description of trying to interest a mainstream newspaper in writing about the affair. (As she tells it in the HuffPo piece, she'd initially thought the affair would be a short one; she started to grow agitated once she realized that her friend had uprooted her whole life for Edwards, even as he touted his blissful marriage during publicity stops on his run for president.)

O'Brien began to get calls -- she thought they were from private investigators or people inside the campaign, initially -- questioning what she knew about her old pal/sometime business partner Hunter. The media began to call. (Her name, after all, was on Hunter's website.) And she saw a blind item in the New York Post that clearly referred to the Edwards/Hunter affair.

So, as the former online journalist writes, she decided to take action.

One day, I simply stepped off the treadmill while exercising and picked up the phone. I didn't even know what I was doing. But I found myself calling a publication that had left a voicemail I'd deleted inquiring about Rielle. I was going to confirm.

To my surprise, nothing happened. I got all braved up and no one would take my call. I hadn't noted who called me, so I got a receptionist. "Can I speak with the person writing about the, um, John Edwards affair?" I ventured. "John Edwards... affair?" Sneered the receptionist. I might as well have asked for the person writing about hating cute puppies. My second call was to a big newspaper. They had called, repeatedly, and clearly were well versed in the affair whispers. Carefully, anonymously, I asked what would happen if I said anything. There was nothing they could do, they said, unless I went on the record and they used my name. Well, no. But I saw light and I just didn't stop.


Finally, she decides to call the Enquirer.

It was not a promising beginning. "I guess... John Edwards is having an affair," I stumbled. "The television psychic?" the other person asked. It was laughable. "The presidential candidate. "Oh," he said, "OH!"

One, it appears O'Brien never even considering handing the scoop to her former employer in St. Louis. Can't blame her, really -- it hardly seems like something the paper would want to touch, even if she wanted to give it to them -- but still interesting.

And two, this is a really bad indictment of journalism today, in our humble opinion. An articulate source with no reason to lie contacts a few newspapers with a scoop about a contender for the presidency -- and they won't even give her the time of day unless she agrees to go on the record with her name, rank and serial number?

Oh, wait. We guess that's only for the tabloids.