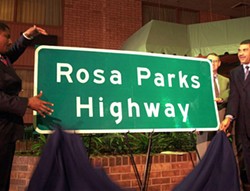 A couple of state reps from Springfield are trying to rename a stretch of highway in their district after a Jewish rabbi now that the roadway has been adopted by the neo-Nazi group National Socialist Movement.

As the Springfield News-Leader reports, the bill under consideration in Jefferson City would rename a portion of the road now known as "West Bypass" after Rabbi Ernest I. Jacob, who worked as a civil-right leader in Springfield after moving there from the concentration camps of World War II.

What the New-Leader article doesn't mention is that the same tactic being attempted in Springfield was first employed in St. Louis back in 2000. That's when a federal appeals court upheld a case in which the Ku Klux Klan sued the Missouri Department of Transportation for the right to adopt a stretch of Interstate 55 between St. Louis County and Jefferson County.

But the KKK's victory was short lived. Soon the Missouri legislature struck upon the idea of renaming that stretch of I-55 after civil rights pioneer Rosa Parks. A sign recognizing the interstate as the "Rosa Parks Highway" was quickly erected and placed next to the sign announcing that the roadway had been adopted for cleaning by the KKK.

As you can imagine, the Klan didn't appreciate that and soon dropped adoption of the road.

And, as Paul Harvey would say (if he were still alive), "Now you know the rest of the story. G'day!"