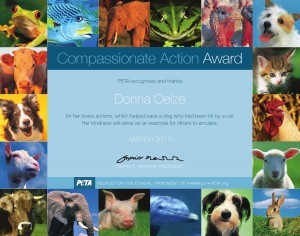 Donna Oelze might have good reason to be sick and tired of dogs. She works as a groomer, after all, and (take it from this dog owner!) not every pup is delighted to get his hair cut or his toenails clipped.

But when Oelze saw a dog walk into the traffic on I-270 and get struck by a car during her morning commute last month, she didn't hesitate to help -- angling her SUV into a position to stop other cars, and then loading the dog into her vehicle and getting him to the veterinary hospital.

The dog, a six-year-old Shar Pei named Dusty, probably owes Oelze his life -- which is why PETA is honoring her with its Compassionate Action Award.

PETA typically gives out 30 or so such awards every year.

And while we're pretty impressed with Oelze's bravery in hopping out of her vehicle on the highway, we're downright in awe of her preparedness. As PETA's press release notes, even before Dusty was hit, Oelze had attempted to lure him off the road and bring him to safety "using a leash that she keeps in her car for such occasions."

Seriously. Donna Oelze doesn't just deserve an award from PETA; we'd like to nominate her for one from the Boy Scouts, too.

Should you be interested in being similarly well-prepared, Woempner tells us that PETA has long offered "car kits" for purchase on its website. (Want to make your own? The packet includes a lightweight carrier, nylon lead and towel. PETA's version also includes some literature about how to help in situations like the one Oelze found herself in.)

"Everyone can be a hero for animals like Ms. Oelze," Woempner says, "whether that's carrying a car kit or just asking a neighbor to let a chained dog inside, taking a homeless cat to a shelter, or calling the police if you suspect animal abuse. There are all sorts of ways anyone can be a hero to animals." Presumably, you don't even need to be a professional groomer to do it.