This Week in Riverfront Times 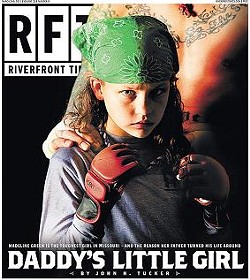 Our new issue is making its way to newsstands and has already found its way onto the Internets. So, what to look for in this week's issue?

New staff writer John Tucker has his first cover story under his belt with "Daddy's Little Girl," the story of 12-year-old Madeline Green, a south-city tween who may well be the next Tiger Woods of women's mixed martial arts. But the story isn't just about ultimate fighting. It's about redemption with Madeline's father, a former MMA fighter named "Mean Mike Green" learning how to steer clear of the law as his daughter's trainer and No. 1 fan.

Meanwhile, restaurant critic Ian Froeb is gaga for the new downtown steakhouse, Prime 1000. Music writer Roy Kasten interviews songwriter extraordinaire and county-music legend Kris Kristofferson prior to his March 9 show at the Fabulous Fox Theatre. And, yes, the Calendar Section has all your Mardi Gras info for Saturday's parade.