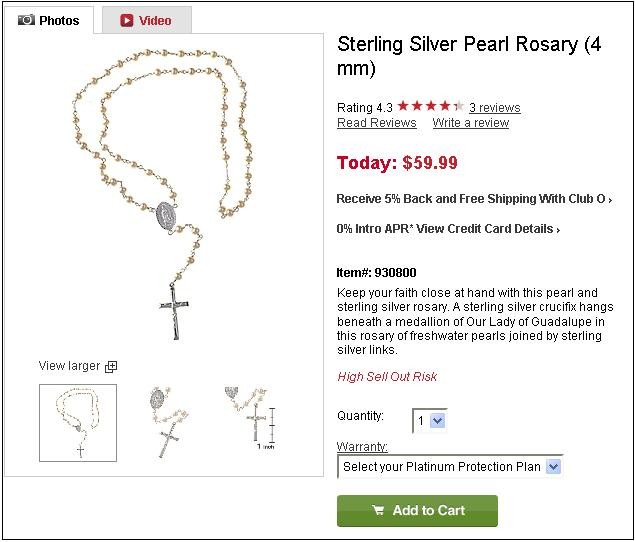 Rodrigo Avila, a Collinsville High School sophomore, has been suspended for five days for carrying a rosary. It's not that Avila has been disrupting classes by reciting his devotions, annoying non-Catholics by conspicuous Catholicism or annoying other Catholics by treating the sacred beads like a piece of jewelry.

Nope, it turns out that Collinsville High's principal suspects Avila's rosary of being a gang symbol. Since schools started banning bandannas, gang members have allegedly resorted to wearing colored beads, just around the same time the rosary-as-necklace has became a fashion statement. (Yeah, Madonna wore one way back in the '80s, but now Britney and David Beckham are wearing them and you can totes buy one at the mall!)

Avila claims his rosary is neither a gang symbol nor a fashion statement. "My godfather gave it to me as a gift," he told KSDK-TV (Channel 5). "I want to wear my rosary because I am proud of it because I am religious."

His mother, Julia Avila, and friend Francisco Hernandez confirm that Avila's rosary is a sign of his love for the church, not that he's in a gang. "I know people it's been getting rough for, for wearing rosaries, not only Hispanics, but white people, too," Hernandez told the Belleville News-Democrat.

Rosaries have become a point of contention in other states. Raymond Hosier, a thirteen-year-old seventh grader in Schenectady, New York, filed a federal lawsuit against the Schenectady school district last June when he, too, was suspended for wearing a rosary. His lawyer claims the suspension was a violation of his First Amendment rights. The case is still pending.

Education Gettin' All Religious Up in Here