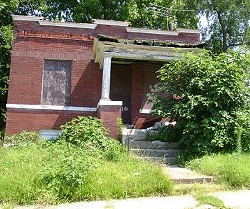 More 2010 Census date is out following the devastating (perhaps surprising) news yesterday that St. Louis lost 29,000 residents over the past decade.

Today the website of St. Louis Mayor Francis Slay has an interesting spreadsheet documenting how each city neighborhood fared over the past decade. The data shows that downtown was the biggest winner in terms of population -- growing 359 percent from 806 residents in 2000 to over 3,700 last year.

Neighborhood in north St. Louis were hit the hardest. The Academy Neighborhood between Delmar and Martin Luther King Dr. lost 26 percent of its population. College Hill near I-70 and West Florissant saw a 37 percent drop in residents; Greater Ville lost 2,000 people, Hyde Park's population went down 29 percent. The Ville and Wells Goodfellow neighborhoods saw a 31 percent and 28 percent decline, respectively.

Much of those north city neighborhoods also experienced double digit percentage drops between 1990 and 2000, producing what's been termed a "hollowing out" of the city's core. McRee Town in south-central St. Louis also saw a 43 percent decrease in population, but that can be contributed to much of the neighborhood being blighted during the 2000s and replaced with singe-family homes.

Curiously some of the biggest decreases and increases by percentage occurred in areas of the city where you'd think no one lives. Forest Park (the actual park and not the surrounding neighborhoods) had 4 residents in 2000 and none in 2010 for a decline of 100 percent. Meanwhile, Tower Grove Park had four residents in 2000 and eight in 2010 for a 100 percent increase.

See how your neighborhood fared here.