A Springfield man pleaded guilty yesterday to his role in a sordid sex slave case in which a Missouri woman was allegedly tortured and kept against her will for seven years.

James Noel, 45, pleaded guilty yesterday in federal court in Kansas City to one count of conspiracy to commit sex trafficking force, fraud or coercion for which he could face up to five years in prison and $250,000 in fines. Neither of those penalties seem likely, though, if Noel agrees to cooperate with authorities in the prosecution of four other Missouri men caught up in the scandal.

Those men include the slave's alleged master, Edward Bagley Sr. of Lebanon and three patrons believed to have paid Bagley for the privilege of participating and/or watching in the sex and torture of the now 24-year-old woman. Those men include Bradley Cook of Kirkwood, Michael Stokes of Lebanon and Dennis Henry of Lebanon. The plight of the female slave -- who authorities say is mentally disabled --  was discovered two years ago after she was hospitalized following a heart attack allegedly caused from electro-shock used in her torture.

Soon Noel was hooked, paying Bagley to witness and participate in electrocuting the woman and witnessing as Bagley told stories about trying to "f*** her to death" and how he introduced the slave -- a teen runaway -- to bondage when she was just 17.

Below is the entire, gruesome account as taken from Noel's plea agreement, including testimony of how Bagley allegedly profited off the woman and had her pinned to the wall -- literally. 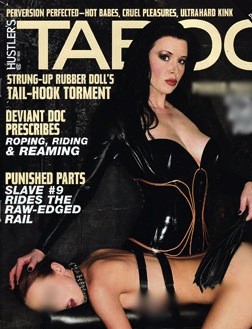 NOEL went with Stokes to the Bagley trailer in a wooded area in Lebanon, Missouri. When Noel entered the residence, the girl was sitting on the floor inside the Bagley residence. She was wearing feet restraints and very little clothing, including nothing above the waist. The "girl" is the Female Victim ("FV") named in the indictment. Bagley invited them inside and told FV to do exercises while Noel, Bagley, and Stokes talked. FV obeyed. FV was approximately 20-years-old at the time. FV was "not smart" and did not appear to have a full mental capacity of someone her age. She did everything that Bagley told her to do. Bagley laid down the rules and threatened to kick NOEL and Stokes out of the trailer if they did not follow the rules. Bagley especially issued orders to FV. He referred to her only as "slave" and she was only allowed to call Bagley "master." NOEL had never seen anything like it and stayed out of "perverted curiosity." Bagley tortured FV by hooking FV up to an electrical device that was connected to a dildo while Noel and Stokes watched. The device sent electrical pulses to the dildo and shocked FV at random time intervals and random intensities. Bagley told Noel and Stokes that FV had done something wrong and he was training her to remember not to do it again. While FV was hooked to the device and being shocked, Bagley was chatting with NOEL and Stokes. Stokes was clearly excited to be there and enjoyed watching FV.

Stokes provided Bagley with $1,000 for Bagley to transport FV to California. He also brought Bagley steaks, cigarettes, cots, clothing, lighters, and cash when he came to the residence for sessions with FV. Additionally, Stokes paid Bagley $300 for Bagley to build a "fucking machine" to use on FV. Stokes admitted he flogged FV, shocked her vaginal opening with a violet wand, tortured her with a sensory deprivation device, and watched Bagley torture her with a crank phone while she was confined to a dog cage.

NOEL continued to visit the Bagley residence. NOEL would call Bagley on the telephone and schedule the meetings. During these meetings Bagley would torture FV while NOEL watched and sometimes allow NOEL to operate the devices. Bagley introduced FV to "bondage" when she was 17-years-old. Bagley said the first year he knew FV, he "tried to fuck her to death." Bagley had FV previously sign a sex slave contract. Bagley showed NOEL the contract and there was a "checklist" of everything that FV had to do as his slave. If Bagley had ever established a safe word, FV was not allowed to use a safe word to stop the abuse. It was obvious that if the FV attempted to ask Bagley to stop, Bagley would make the session more painful for her. NOEL had Bagley test a few devices on his arm because he was curious how painful they were. The violet wand was not that painful to NOEL, but the crank phone and another electrical device that Bagley used on FV were extremely painful.

NOEL used the crank phone and another electrical device on FV during his visits to the Bagley residence. These devices were wired inside FV's vaginal and anal openings and to her toes at the start of the sessions. NOEL electrocuted FV with the crank phone, but did not kill her. Sometimes Bagley and NOEL would each use a crank phone on her at the same time. NOEL paid $300 for a special "show" that lasted 2-3 hours that included these sex acts. Stokes wanted to attend the special show, but Bagley would not let him attend. During that special show, Bagley said he had to be very careful that night with FV, because he was taking her to a photo shoot soon and he did not want any burns or marks on her.

Bagley told NOEL that he was going to set up a website where he could stream video "shows" of him torturing FV over the internet and people would have to pay to see them. Bagley asked NOEL to invest in the website, but NOEL declined. Before Bagley and FV went to California, Bagley had FV do practice video shows.

Bagley told NOEL that he had killed a couple of people in the past over a drug debt. Bagley used marijuana regularly and possessed firearms in his residence. Bagley said he overpowered the two people, took them to an abandoned house, and tortured and killed them. FV was present during these statements and based on her demonstrated mental capacity, would have easily believed him. FV appeared emotionally and mentally attached to Bagley without anyway to leave. It was obvious when you met FV that she was mentally delayed for her age. She lacked the ability to communicate normally and had a limited vocabulary. FV did not have any ability to offer an opinion or refuse the orders from Bagley. If she had tried, Bagley would punish her for doing so.

In approximately 2007, Bagley had FV begin dancing to make money for him. FV was Bagley's only way to make it financially. Bagley said "my bitch is making me about $1,800 a week." NOEL went to the club where FV danced. FV had to give Bagley the money after she was finished dancing, and NOEL saw her do it. FV would come off the stage after collecting money and hand it to Bagley. FV was not allowed to keep the money. NOEL witnessed Bagley scream and reprimand FV at the club. Bagley made a video to help promote FV at the club and it would play repetitively at the bar. Bagley said he had to "make his money while FV still had her youth." During this time period, Bagley told NOEL he had to slow down on the sessions at home with FV because Bagley could not afford to have her all marked up while she was making money for him dancing.