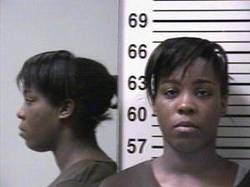 An 18-year-old teenager arrested last week at Alton High School is expected to be transferred to Ferguson this week in connection with the murder this month of Lawrence Valiant.

Valiant, a 32-year-old cook with the Missouri National Guard, was about to be re-deployed to Afghanistan when he was instead shot to death February 13 outside his apartment complex in north St. Louis County.

According to police, Jacqueline Baron of the 2000 block of Dunnegan Street in Alton traveled to Ferguson with an unknown male accomplice to meet Valiant. Once there, the two suspects allegedly tried to rob Valiant and shot him.

Baron faces charges of second-degree murder, armed criminal action and first-degree attempted robbery. Her accomplice remains on the loose. Baron was being held this week in Madison County, Illinois, with bail set at $1 million.