Thomas Jefferson Was Here -- Or At Least His Books Are

Thanks to some stellar research by the historians at Monticello, Thomas Jefferson's Virginia estate, Washington University librarians have learned that a cache of 74 books that have sat in the library's special collections for 131 years actually belonged to the third President.

Aside from the collections at the Library of Congress in Washington, DC, to which Jefferson sold 6,700 books after the British burned down the first library in 1815, and the University of Virginia in Charlottesville, which Jefferson founded (and where he remains something of a cult figure), it is the largest assemblage of Jefferson-owned books.

The Monticello scholars were able to identify the books as Jefferson's based on marginalia in his handwriting, particularly his distinctive rendering of the initials "T.I.", which he would inscribe at various places within his books. In Latin, there is no distinction between the letters "I" and "J", so early printers didn't bother with capital "J"'s, either. Jefferson, who was, apparently, something of a traditionalist and also a fan of Latin, followed suit. (This would seem to prove the point of a recent New York Times article about how marginalia is useful. Jefferson also faithfully corrected typographical errors when he found them.)

But the question remains: How did all these books end up in St. Louis, a city that has no connection to Jefferson except for the fact that he scooped it up in the Louisiana Purchase? And at Wash. U., which didn't even exist when Jefferson died in 1826?

When Jefferson died, he left debts totaling more than $100,000 in nineteenth-century money (equivalent to about $2 million today). In 1829, his family attempted to raise some cash and avoid selling Monticello by auctioning off Jefferson's personal library, which encompassed 1,600 volumes, all collected in the last nine years of his life. (They also raided his wine cellar, which was said to contain some rare and excellent bottles.) Before the auction, Jefferson's grandson-in-law Joseph Coolidge wrote a letter that contained a detailed list of the volumes he and his wife Ellen Wayles Coolidge wanted to purchase themselves. "If there are any books which have T. J. notes or private marks, they would be interesting to me," he wrote.

Apparently the Coolidge family cherished the books for the next 50 years or so, but then in 1880, a family member donated them to Wash. U. along with 3,000 other books that had belonged to the Coolidges. For some reason, the donor neglected to mention who the original owner of 74 of those books had been. The donation was, however, memorialized in an article in the Harvard Register which was recently unearthed by Ann Lucas Birle, a scholar at the International Center for Jefferson Studies at Monticello.

Birle realized that the donor, Edmund Dwight, was the Coolidges' son-in-law. He'd donated the books to Wash. U. because its founder, William Greenleaf Eliot, was a great-uncle and fellow Harvard man, and because he felt that Wash. U., then in its infancy, could probably use 3,000 books in its library. Birle remembered that some the Coolidges' books had belonged to Jefferson and passed the article and Joseph Coolidge's letter on to another scholar at the Center, Endrina Tay, who was in the process of compiling a list of all the books Jefferson ever owned, read and recommended. Tay, in turn, contacted Erin Davis, Wash. U.'s curator of rare books to find out if the books were, indeed, Jefferson's.

Jefferson's books had long been split up and dispersed to various corners of the library's special collections, but with the aid of a 100-year-old inventory ledger, Davis and assistant archivist Miranda Rectenwald were able to track down all 74 volumes and find traces of Jefferson's marginalia.

Among the books in the collection are a copy of Aristotle's Poetica, Plutarch's Lives (which contains a note hand-scrawled by Jefferson -- in ancient Greek) and annotated copies of Freart de Chambray's Parallele de l'architecture antique avec la moderne and Andrea Palladio's Architecture de Palladio, contenant les cinq ordres d'architecture, two architectural reference books that Jefferson relied upon while he was designing the campus of the University of Virginia. 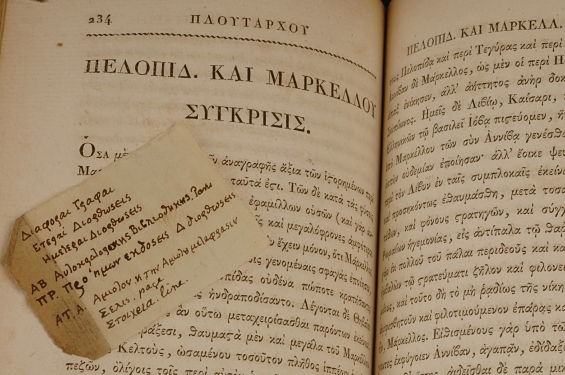 (In addition to serving as President of the United States, founding and designing a university and writing the Declaration of Independence, Jefferson could read and write and most likely speak French, Italian, Latin and Greek. He was also an accomplished violinist and the inventor of many useful gadgets, including a very primitive copy machine. Many of these are on display at Monticello, which he designed and built and is by far the coolest Presidential home.)

The folks at Wash. U. are naturally thrilled to discover the provenance of these previously-neglected volumes.

"Washington University is thrilled to have secured and preserved these volumes since 1880," Shirley K. Baker, vice chancellor for scholarly resources and dean of University Libraries, said in a press release. "It is particularly appropriate that these books should be here in Missouri. It was Jefferson who acquired this land in the Louisiana Purchase, and St. Louis was the jumping-off point for the expedition Jefferson sent to explore the new territory."

Students and visitors alike are welcome to stop by Special Collections and take a look.

"Jefferson's mind had a seamless, all-encompassing quality, making the kind of connections typical of an Enlightenment thinker," said David Konig, a professor of law and history at Wash. U. and himself a Jefferson scholar. "What he read in one field he would apply to his thinking in another. Each of these volumes will be of interest to at least five different scholars in at least five different fields."