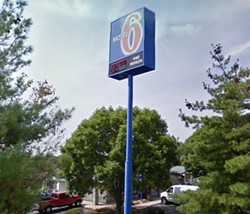 The couple was Ronald, 47, and Melissa McRoy, 30, of the 6900 block of Field Avenue near Carondelet Park in St. Louis.

A motel employee discovered the victims around noon yesterday at the motel after they failed to leave by checkout time. County police believe the McRoys were shot inside the room and that no one else was involved in the incident, which seems to suggest it was a possible murder suicide.

Motel records indicate that the couple had been staying at the motel for several days and did not register a vehicle with the front desk.