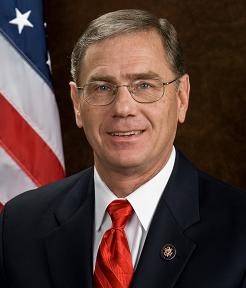 Congressman Blaine Luetkemeyer (R-9th District) is proud of his view that global warming is a myth. So proud, in fact, that last weekend he attached a provision onto a budget bill that would ban the United States from funding the Intergovernmental Panel on Climate Change.

The IPCC is the group that -- along with Al Gore -- won the 2007 Nobel Peace Prize for their efforts to research climate change and educate the world on its consequences. Of course, all you have to do is mention the words "Nobel Peace Prize" and "Al Gore" to know what knee-jerk Republicans, such as Luetkemeyer, think about the IPCC.

Luetkemeyer writes on his website that the IPCC is "fraught with waste and fraud ... engaged in dubious science" and "the last thing hard-working American taxpayers should be paying for."

Never mind that most climate scientists are in full agreement with the IPCC. Luetkemeyer, instead, holds tight to the assertions of a dwindling number of researchers questioning climate change and points to the disproven "Climategate" conspiracy, in which the IPCC allegedly suppressed findings contradictory to global warming.

Luetkemeyer's amendment passed the House in a bi-partisan vote that would kill $13 million in U.S. funding for IPCC in the unlikely event that it also clears the Senate.

Keep up on all the St. Louis news, opinion and snark by following Daily RFT on Facebook or Twitter @chadgarrison.